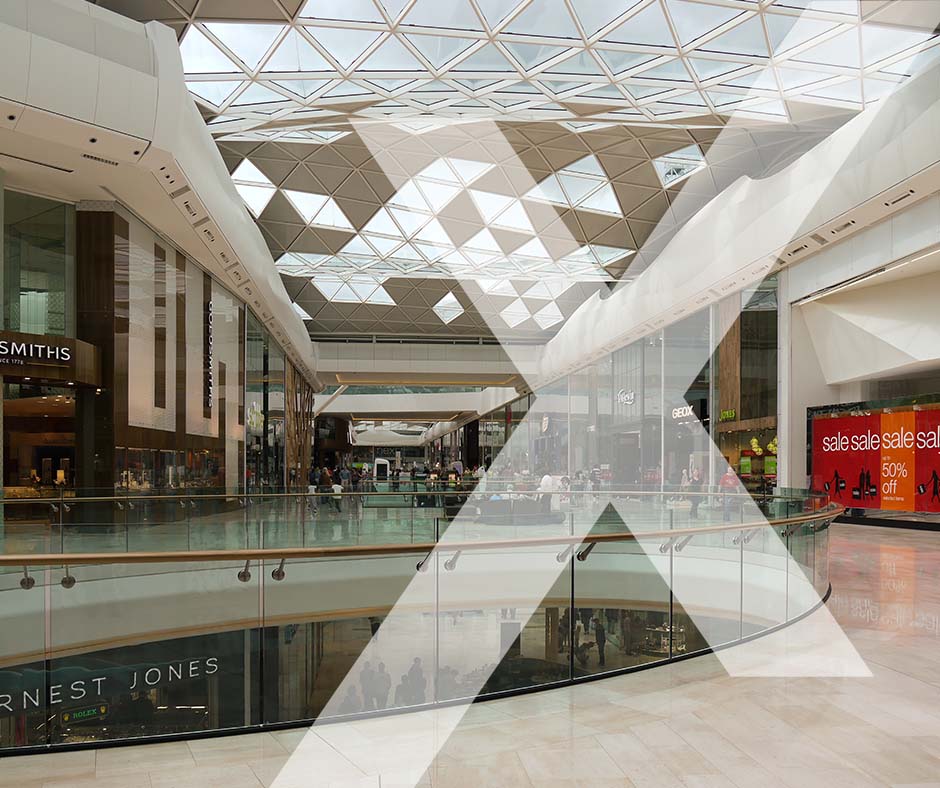 Shopping Malls proliferated out of the suburban expansion during the mid-1950s, which brought efficient transit to prosperous neighborhoods spread across postwar America. Rising automobile ownership made these retail centers accessible and convenient, offering a bounty of merchandise and services.

Today, those same centers that lifted up suburbia and opened up the world through mercantilism are facing a host of challenges leading to mall re-development across America.

The first enclosed shopping mall opened in Edina, MN in 1956, designed by Victor Gruen, an Austrian-Jewish architect who emigrated to the United States in 1938. The Southdale Centre offered a spacious, climate-controlled environment with shops and public art. Gruen envisioned a core community space that could offer shopping, medical facilities, schools and residences. Gruen’s idea took off and over the next three decades developers offered retailers generous incentives to build department stores in mall settings. Brands expanded into standalone stores and chain stores proliferated. By 1985, 2,500 malls were developed in the United States. Anchored by major department stores, malls provided a safe haven to meet up, hang out and shop.

X-Team affiliate Jim Bieri, Principal with Stokas Bieri Real Estate, a Detroit based commercial real estate firm specializing in retail transactions, has been involved in the mall business since 1972. His firm provides strategic consulting to a wide variety of retailers and property owners. He has witnessed the sector’s growth, apex and current struggles.

Bieri sees a combination of factors, including over-development, demise of Department stores and saturation of the market hurting the sector. He explains, “The population of towns and cities had not changed significantly, and developers just built too many malls.” According to Cowen Research, oversupply of malls outpaced demand with development eclipsing twice the population growth between 1970 and 2015. In the 1980’s the explosion of outlet stores, and “big-box” power centers further siphoned mall business. From 1988 to 2016 department stores market share dropped from 45 % to 15%. Conversely value stores rose from 58% to 80% and is expected to provide continued growth and share gains.

In many cities, consolidation of owners proved a detriment as they cannibalized their own properties. Tenants would opt to lease in the highest producing center in the portfolio, leaving others to die. Financing structure changed and developers began accepting public investment. This placed pressure to produce short-term results, and decisions were made that were not in the best interest of the development.

“A mall is like a sports car; it needs constant attention and capital investment. It is already a fast machine, but must be maintained,” Bieri asserts. “In the past, a $10-15 million upgrade was considered a big deal. Now, it is not even worthy of putting out a press release.”

So, what does the future hold for the mall sector? Cowan’s consumer tracking and studies show that three quarters of customers still prefer to shop in physical stores. Brands, a social experience, current styles and immediate gratification are key preferences for bricks over clicks. Analysts predict that A class malls will thrive with intensified investment to stay fresh and competitive. However, C and D class malls, which account for about 30% of properties are at most risk.

Bieri echoes the sentiment that malls in great markets will rebound. He believes that millennials will embrace them for their conveniences, and many will have private entrepreneurial ownership. South Coast Plaza, Aventura and Bellevue Square are examples of privately owned centers that continue to flourish. Located near affluent communities accessible by freeways, they offer curated luxury boutiques and anchors offering amenities that match their customer’s tastes and pocketbooks. According to its company statement, South Coast Plaza, attracts over 22 million visitors per year, with annual sales (prior to the pandemic), approaching $2 billion and a sales volume of over $800 a square foot. To cater to their sizeable Chinese tourist trade, the center provides Mandarin speaking concierge services and accepts China UnionPay as a payment method. Luxury will continue to lead, concentrating shoppers at the top-tier.

As the gap widens between Class A malls and the rest of the sector, there will continue to be an ongoing retraction in the number of malls throughout the country. By 2030, it is estimated that there will be 300 to 750 malls operating. Bieri states, “In most markets you’re going to end up with one or two malls. I don’t see many of these (redevelopments) taking less then perhaps 10 years. That said, those redeveloped sooner are those retained by the property developer. The demise of the department store hurts everybody. If the developer can repurpose the space to include other uses, this is the best approach- even though the volume (of business) may not be replaced. Repurposing a mall can work if you have a good location, connection to transit, with a demand for entertainment, food and hospitality. If a developer can deliver those amenities and keep to the same price point, in theory, you will provide the customer with what he or she wants.”

The Shops at Westshore, formerly Westshore Mall in Holland, Michigan is such a case. In 2009, the mall was over 30% vacant, and losing its anchor stores to bankruptcy or consolidation. The mall was originally built in 1988 by Bramalea Limited, a Canadian development company. Bieri recalls, “The local developer purchased a dying mall from the lender and began the process of “de-malling” it. He was able to cut about 50% of the GLA (gross leasable area) by demolishing part of the structure. He then had the ability to create additional GLA, by constructing freestanding buildings and reinventing the development as an outdoor mall.” Today, The Shops at Westshore feature a farmer’s market, dining, a studio gym, physical therapy practice, investment advisors and in 2019 signed a new tenant, Grand Rapids Community College. The college has purchased the center’s former JCPenney store to establish a central campus that consolidates four leased locations. This is an example of how smart, community-centric redevelopment can mitigate the loss of property and sales tax base that support basic services.

Bieri sees a growing trend in rezoning lower tier mall developments to industrial use. Empty anchor department stores are being snapped up by online retailers and logistics firms, who convert them into fulfillment centers. Driving this trend, many retailers have implemented a BOPIS/BORIS model, which allows a customer to buy online, pickup or return in-person. And with the shift to the web, omnichannel shopping continues to grow in popularity. Surf the net at midnight, click, purchase and pick up the next day at the store. Other uses for abandoned malls include self-storage and distribution centers. In December 2018, U-Haul acquired 13 K-Mart and Sears stores and converted them into storage facilities. A year later, Amazon bought Randall Park Mall and converted it into an 855,000-square-foot fulfillment center that can process up to 100,000 orders a day, operated by an assembly chain of workers and robots.

And, what of Victor Gruen’s hopes and dreams for the great American mall?

Tempe Marketplace, a 1.3-million-square-foot outdoor mall in Tempe, Arizona may answer that question. The property sits at the intersection of two main freeways, a stone’s throw from the main Arizona State University campus. The mall was built on land once designated as a Superfund site by the EPA. In 2004, Vestar Development partnered with the City of Tempe and agreed to fund the majority of environmental remediation with an additional $7 million loan from U.S. Housing and Urban Development. It became the largest brownfield land cleanup in the history of Arizona. The shopping center opened in 2007 with big-box stores, dining and an interesting mix of regional and national retail and promoted “the District” its lively entertainment core. The success of the mall ignited development of the surrounding area. Multifamily mushroomed along with corporate headquarters bringing employment for thousands. Tempe Marketplace sits adjacent to Arizona State University’s new Novus Innovation Corridor, a 10 million square foot public/private partnership with Catellus Development Corporation being constructed in phases through 2024. Novus will bring an estimated 34,000 jobs, multifamily housing, office, retail, entertainment, hotel, and a research and technology hub.

Toward the end of his life Gruen was asked if he was proud to be considered the “Father” of the mall. He regrettably felt that his ideas were lost from his original vision. The architect might feel differently today as the future of mall development is expected to be mixed use- to shop, work, play, learn and live, as he imagined sixty-five years ago.